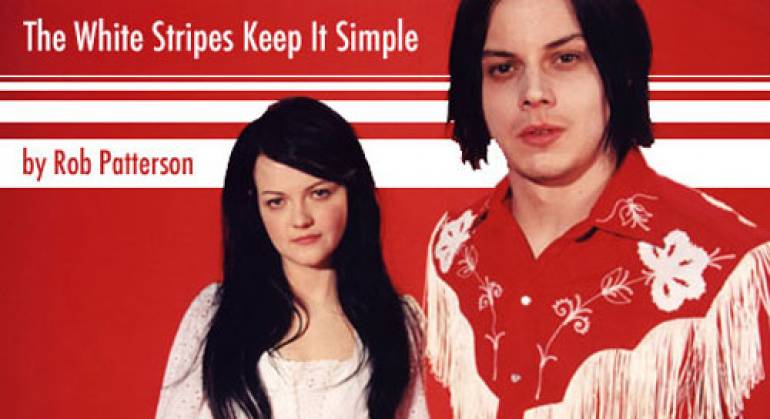 The White Stripes are vanguards of a back-to-basics movement in music that is bringing rock back to its roots. Making their music with just guitar, drums and vocals — onstage at least — the duo creates a sound that is grounded in the garage-rock consciousness and steeped in the whiskey of the blues.

So why is it that Spin magazine calls them “baffling and compelling” in the same issue where the group graced the cover? Part of the reason is no doubt the mystique created by singer and guitarist Jack White and drummer Meg White, who claimed at first to be siblings and later turned out to be a divorced married couple — and White is Meg’s last name. Dressing themselves in red and white striped garb and singing everything from blues classics to original songs about, for instance, a screwdriver, The White Stripes delightfully confound expectations at every turn.

Yet they managed over the course of their first three independently-released albums to become media darlings without any promotional or publicity push, landing on the MTV Awards show and being named one of 10 Bands to Watch in 2001 by Rolling Stone. And that even baffles Jack White. “It’s a confusing thing,” he says. “I don’t know. I know a lot of these writers and everyone have jobs to do. Maybe some people say it’s the band they’ve been waiting for a while to write about; maybe some people are just doing their job because they were told to write about us. How can you tell? Reading one article to the next, you can’t really tell what the scope of it is. I get the feeling a lot of people have a job to do, and they have to write about something, and this is what people are talking about.”

But the real reason The White Stripes are so acclaimed and have now graduated to V2 Records for their latest release, Elephant, is very simple: simplicity. With a deeply grounded song craft and a stripped down sound, The White Stripes offer music that communicates directly, be it one of their originals or a cover of something by Son House or Captain Beefheart.

The secret to achieving that effect, according to Jack White, is creating within prescribed rules and parameters. “We’re white people who play the blues, and our problem was how do we do that and not be fake? Our idea was to strip away everything unnecessary, to put ourselves in a box, to make rules for ourselves.

“It makes the band what it is,” he insists. “I’m disgusted by artists or songwriters who pretend there are no rules. There’s nothing guiding them in their creativity.”