Posted in MusicWorld on June 17, 2003 by Jon Matsumoto 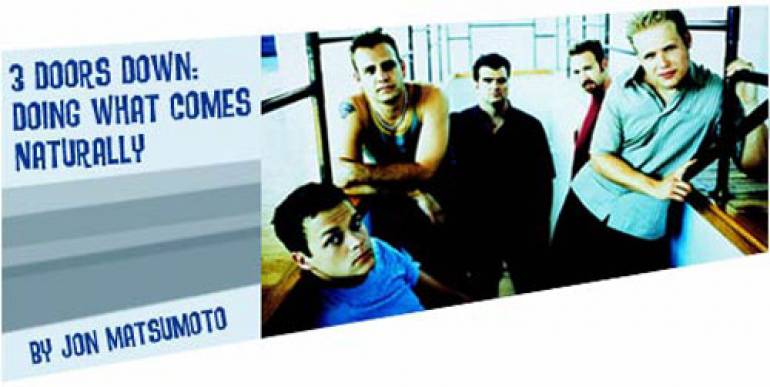 When the members of 3 Doors Down released their debut album, The Better Life, in 2000, they had no idea just how good life would get for the band that hails from the small town of Escatawpa, Mississippi.

The staggering numbers probably tell the story the best: over six million copies sold of The Better Life. Four No. 1 hit singles from the album. In addition, radio couldn’t get enough of 3 Doors Down and a demanding fan base kept the quintet on the road practically nonstop for two years.

Awards were also plentiful. At last year’s BMI Pop Awards, 3 Doors Down vocalist Brad Arnold won the Songwriter of the Year distinction and placed four tunes on BMI’s 50 Most Performed of songs for the year list.

On an album loaded with hits, “Kryptonite” was the one song that resonated the most with the public. Yet even kryptonite couldn’t stop these quasi-supermen as they ascended to previously undreamt of heights with a catchy blend of tunefulness and hard-rock dynamics.

Nevertheless, by the time the band got off the road in 2002, Arnold was so exhausted that he couldn’t get himself to listen to any music for an extended period of time. But rather than take its newfound wealth and chill out in some ritzy hideaway, the band members chose to retreat for some much deserved R&R back in Mississippi.

3 Doors Down’s sophomore album contains more of a melancholy flavor than The Better Life. Despite the group’s enormous popular success, Away from the Sun includes some songs about isolation and loneliness, proving that mass acceptance hasn’t dulled Arnold’s introspective sensibilities.

Musically, the new album is also quieter. The softer passages are more frequent, though there are those times when the band really puts the pedal to the metal. 3 Doors Down guitarist Chris Henderson says the group members refused to reduce its music to a popular formula to be copied. With the Away from the Sun album, the band members let the music come to them naturally rather than try to write specific types of songs.

Earlier this year, the band showed its patriotic spirit by playing a Naval Installation tour. The tour culminated with 3 Doors Down performing on the deck of the U.S.S. George Washington. The group filmed the video for the single “When I’m Gone” at this show. The song and video have not only resonated in a big way with U.S. military personnel, but with the larger public. Paint these 3 Doors red, white and blue.