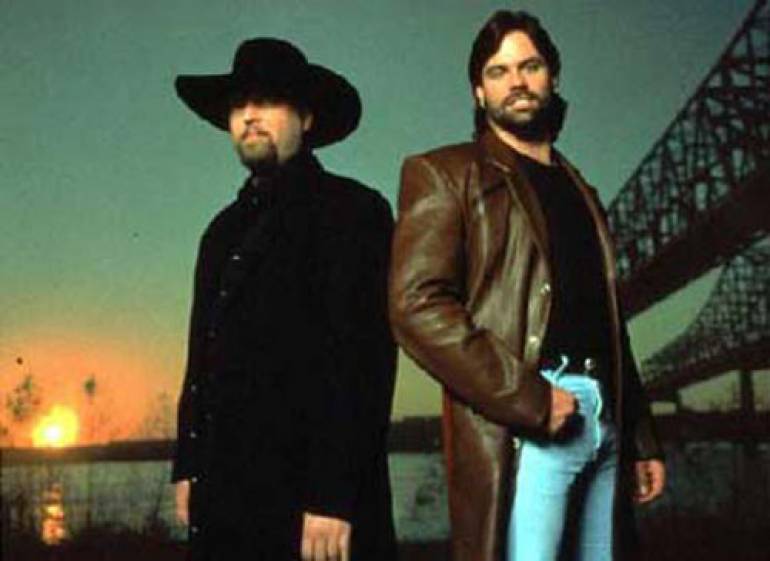 Montgomery Gentry is riding high. A year and four successful singles into their first (gold) album, Tattoos and Scars, the rough-and-ready duo says it's been a fun and fast ride.

Among the many honors heaped upon them is being named favorite country duo at the recent American Music Awards. They won R&R's best duo title, too, held for seven years by Brooks and Dunn, for whom Montgomery Gentry is now opening. From a hotel room in Albany, NY, Troy Gentry said of the AMA win, "I remember thinking how cool it would be to entertain at a level where you'd be recognized on an awards show. It's an honor, but not something we shoot for; we're out to make music and have a good time."

And they do have fun. About their being named among Country Weekly magazine's "Country's 25 sexiest stars," Eddie Montgomery quips: "As T-Roy says, we're the only duo in there, so it took both of us just to make up one!"

While laughter and frivolity are always a part of "The Montgomery Gentry Way," they're dead serious when it comes to their career. "We're steadily growing and widening our fan base," says Gentry, "and I just want to stay consistent, so we can travel and perform many years down the road."

Has success changed the Kentucky farm boys? "We've been so busy we haven't had time to slow down and take it all in," says Montgomery. "We love playing the big arenas and hanging out with the fans, but we're the same old guys we've always been. When we're off, we'll go hang in honky tonks."