Posted in MusicWorld on November 30, 1999 by Bruce Britt 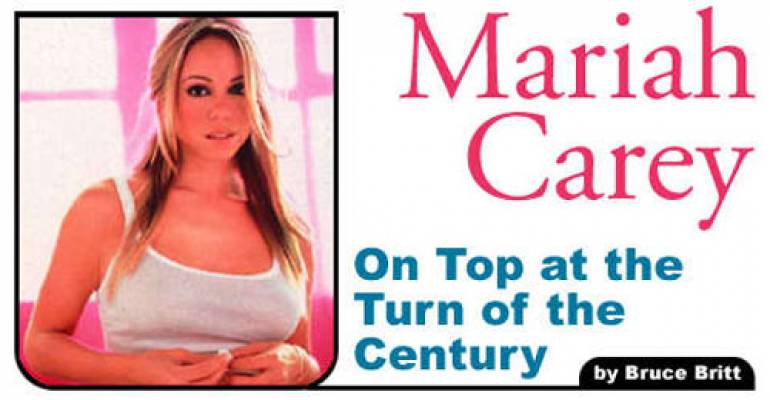 As a new century dawns, pop diva Mariah Carey finds herself in an auspicious position. Having surpassed her contemporaries in record sales, the acclaimed singer/songwriter now finds herself competing with the legendary likes of Elvis Presley and The Beatles.

The biggest-selling female recording artist of the 1990s, Mariah has placed 14 chart-topping singles on the Billboard Hot 100 Singles Chart, a feat rivaled only by the King (18) and the Fab Four (20). In fact, when her recent single, “Heartbreaker,” charted its second week at #1, it marked Mariah’s 60th week atop the charts, which breaks a long-standing 59-week record established by the Beatles as the artist(s) with the most weeks at #1 in the 41-year history of the Hot 100.

Perhaps even more remarkable is the fact that Mariah may outpace her legendary peers. Having already sold over 120 million albums worldwide, Mariah has weathered every imaginable pop music upheaval, emerging as one of the few sure-bet platinum artists of her time. Indeed, within months of its release, Mariah’s latest Columbia Records album, Rainbow, had already racked up sales in excess of two million copies. The album - Mariah’s first collection of all-new material since 1997’s quadruple-platinum Butterfly - was an immediate hit. An exclusive Internet preview of “Heartbreaker” was made available in August, drawing a mind-boggling 2.6 million hits. Around the same time, a video for the single “Heartbreaker” debuted on MTV, and became one of the top 10 most-requested videos on the network’s top-rated “Total Request Live” for seven weeks running. A “Heartbreaker (Remix)” video features appearances by hip-hop aristocrats Da Brat, Missy Elliott, Snoop Dogg, and DJ Clue.

Running the gamut from pop and r&b to hip-hop and gospel, Rainbow features 13 new original Mariah compositions, including the soulful r&b track “Bliss” and the transcendent inspirational tune “They Can’t Take That Away From Me (Mariah’s Theme).” A show-stopping rendition of Phil Collins’s “Against All Odds (Take A Look At Me Now),” rounds out the album.

Rainbow has not only proven to be a hit with fans and peers, but critics as well. Billboard called the album, “a seamless synthesis of the pure-pop sound that distinguished her early efforts and the streetwise rhythms inherent in her more recent recordings.”

Born and raised in New York by her mother, a former opera singer with the New York City Opera and a vocal coach, Mariah Carey began singing at age four. By the time she was in junior high school, she had begun composing songs. After her high school graduation, she got her first big break, singing backup for Brenda K. Starr, which led to her signing with Columbia Records.

Mariah’s enduring appeal is impressive. Surfacing in the waning days of the dance-pop craze of the late ‘80s/early ‘90s, she displayed a chiming, canary-like voice capable of stratospheric highs. Though her premiere album sold over 12 million copies worldwide, some pundits wondered if Mariah could survive the musical turbulence of the ‘90s. The singer artfully silenced her critics, refining her buoyant pop sound and incorporating rap influences. All seven of her albums are certified multi-platinum.

While Mariah is probably best known as a vocalist, she is also an accomplished songwriter and producer. With the exception of her cover version of the Jackson 5’s “I’ll Be There,” Mariah has co-written all of her #1 singles, and has co-produced all but four of them.