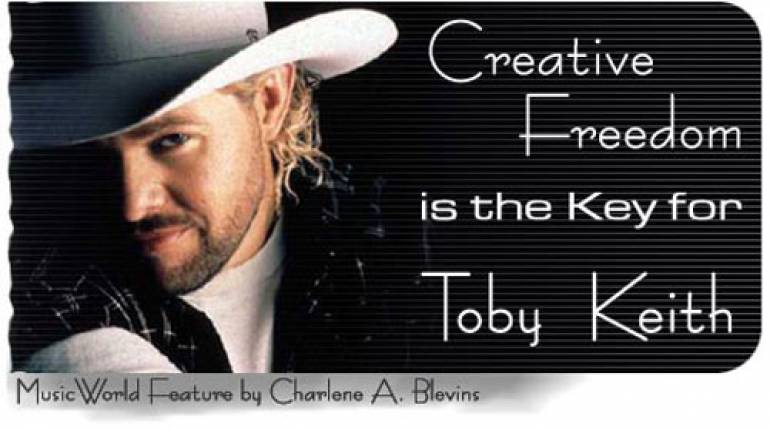 When an artist in the labyrinthine music bureaucracy calls his music life "paradise," you want to know more. For the 6'4" Toby Keith, it's all about creative freedom.

Known as a self-reliant maverick on Nashville's Music Row, Keith surprised everyone by signing with the new DreamWorks Nashville - which just happens to be run by his producer, James Stroud. "I always felt chained and shackled wherever I was," Keith admits, explaining that his previous labels loved his commercial songs, but nixed the ones that showed attitude or were a little left of center. "At DreamWorks, I don't have to turn in an album and then have them send it back saying they don't like this or that. When James and I are done with it, we move. It's my music my way, and that's all I could ever ask for."

Keith's DreamWorks debut - his seventh album - was released last November and was recently certified gold by the RIAA. "How Do You Like Me Now," the title cut, became an astonishing five-week number one song. And this year he won his first ACM Male Vocalist of the Year nomination, as well as a Best Video nod for the second consecutive year.

Keith wrote or co-wrote nine songs on How Do You Like Me Now, continuing his steadfast resolution to write at least 90 percent of the material he records. His musical emancipation extends to his songwriting. "It's so easy to be me now, to do my job," he says. "They just want me to do what I do best." That seems to be creating an atypical and enduring body of work: seven career number ones, five BMI Million-Air awards, and six albums already certified gold or platinum.

Not satisfied with a decade-long music career, this former football player and oil field worker is now a restaurateur, a thoroughbred racehorse owner, and, recently, an actor. He's done commercials for 10-10-220, and appears in the new Dukes of Hazzard movie. "They called me up to do music, and when they heard me talk, I guess they decided they needed the hillbilly factor," he laughs, "so they wrote me into the script."

Keith says he's open to more roles - with conditions: "If they want me to show up and be myself, I can do that. But I'm not going to fly out to L.A. and stand in line with 20 other yahoos with bandanas on trying to get the cowboy part."

With all this success in so many different areas, is there anything else this maverick Oklahoman wants to try?

"I'd be greedy to ask for anything more."