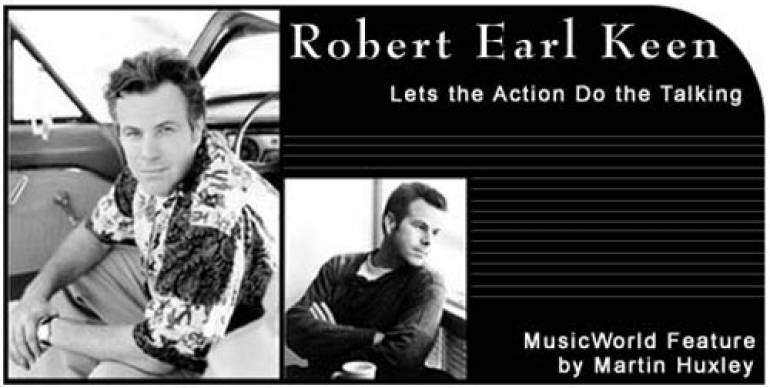 Over the course of nearly two decades, Texas troubadour Robert Earl Keen has emerged as one of America's most distinctive songwriter/performers, albeit one who consistently resists easy stylistic and demographic pigeonholing. His richly detailed narratives balance gritty insight and literate lyrical craft, while maintaining a tough honky-tonk edge deeply rooted in Lone Star roadhouse tradition.

Keen's most recent release, 1998's Walking Distance, was an ambitious song cycle that found the artist eloquently exploring new territory. "All the songs have to do with comings and goings," he said at the time, adding, "I like action. I write better action stuff than I do emotional stuff. I enjoy creating a certain simplicity, communicating a story and trying to be real clear. Lyrically, I try to be real plainspoken. I don't have a big well of verbiage in my head. Instead of trying to dig into adjectives and descriptions about this or that, I'll let the action do the talking."

The Houston native first began performing in the early '80s, while earning a degree in English Literature at Texas A&M, where his roommate was Lyle Lovett. After releasing the first of several independent albums in 1983, he survived an unsuccessful stint trying to peddle his compositions in Nashville, before setting up shop in the tiny Texas town of Bandera. Since then, Keen has recorded prolifically and toured incessantly. His compositions have been covered by a diverse array of artists including longtime pal Lovett, Joe Ely, Nanci Griffith, Gillian Welch, Jill Sobule, Dar Williams, country supergroup the Highwaymen and even comedian Jeff Foxworthy.

By the time he linked with the high profile Arista Austin imprint for 1997's Picnic, Keen had developed a rabidly devoted live following, particularly in his home state and throughout the southeastern U.S. Though he ended his association with the label following the release of Walking Distance, the Arista connection helped raise his profile and expand his audience considerably.

In recent years, Keen has organized and hosted the Texas Uprising, an annual outdoor music festival in which he shares the bill with a variety of fellow Texas artists. This year's Uprising has expanded to take place on three dates in three cities - May 27 in Houston, May 28 in Fort Worth and June 11 in Watsonville, California.

"I think everyone has a little hillbilly in them," Keen comments. "I think my music speaks to everyone a little bit."