Posted in MusicWorld on December 31, 2000 by Martin Huxley 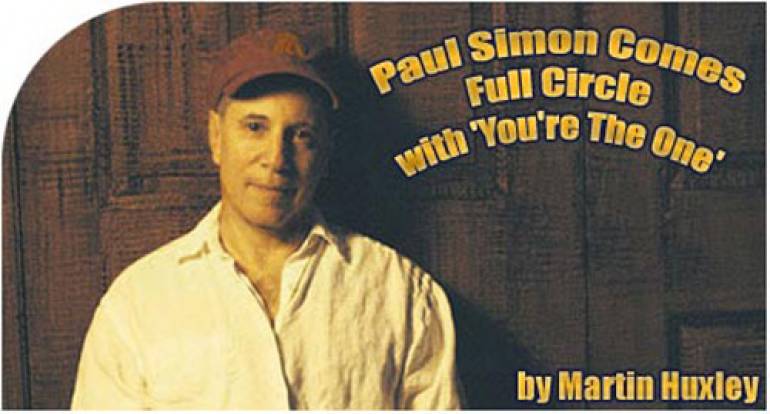 Paul Simon's new album, You're the One, is both his first musical project since his ambitious 1997 Broadway musical The Capeman and his first non-concept album since 1983's Hearts and Bones.

You're the One is an affectingly eloquent song cycle that meditates poignantly on love, life and growing older, delivered with the artist's usual blend of emotional insight and wry, self-deprecating humor. Such impressive new compositions as "Darling Lorraine," "Old" and the album's title track showcase the veteran troubadour's unique abilities as both a vivid storyteller and a compelling performer.

Employing a relatively straightforward, understated pop sound rather than the African and Brazilian influences that Simon explored, respectively, on 1986's Graceland and 1990's Rhythm of the Saints, You're the One has the air of an artist coming full circle and reembracing the longstanding strengths that first caught the public ear with his '60s hits as half of Simon & Garfunkel, and subsequently in his productive solo career.

"It's not about another culture this time. It's about songwriting and storytelling," Simon recently told The Boston Globe. "If you live long enough and you've seen enough stuff, you begin to accumulate experiences and start to tell of those experiences. Everybody loves a story, and stories are the theme of this record."

One of the album's main themes is the aging process. "I've been getting old ever since I hit 30," Simon comments. "But, you know, the truth of the matter is that it takes a long time to get really good. A long time. You can see that in the adjacent fields of blues and jazz-and the same will be true in rock, too, I think."

Longtime Simon admirers might be surprised to learn most of You're the One's songs began with music rather than words. "The process is fundamentally the same as the one that started with Graceland," explains Simon. "That is, I write the songs by creating the music tracks first. In fact, if you take my voice out of this album, you would find that most of the tracks stand up as instrumental pieces."

As a four-decade musical survivor, Simon is philosophical about the ups and downs of stardom in an ever-changing pop landscape. As he told New York magazine: "Out of my generation, there's a handful of people who were big stars once and maybe now they're not going to be big stars. Well, what did you think was going to happen? That everything was going to stay the same? You were a big star and you were going to be a big star forever? No, nothing stays the same. And being a star is of zero importance. Get past that.

"You can't change what popular culture is by talking about it," Simon continues, adding, "You can change it by embodying something that's real, that's meaningful, that's a powerful idea that can sweep the world. That idea can come from any age, and most of those ideas do come from people who are older."