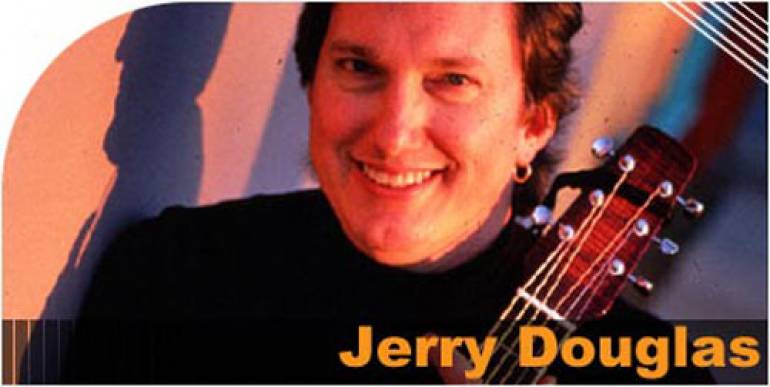 Dobro player-extraordinaire Jerry Douglas has won multiple Grammy Awards as both a producer and a performer. His latest album, Restless On The Farm, features cohorts ranging from Bela Fleck to Steve Earle in supportive roles. The flat-out truth is that whenever someone mentions the word dobro in modern musical circles, Jerry Douglas's name comes up as the natural synonym for the instrument.

Yet, even as a solo musician, Douglas probably knows as much as anyone else about what it's like to be in the core of the band; helping to shape the sound and style of either a collective or backing another artist. After all, he had already racked up experience form his father's band, West Virginia Travelers, before starting his professional career at 16 as a member of The Country Gentlemen. And he certainly spent plenty of time contributing to groups such as J.D. Crowe and the New South (alongside Ricky Skaggs, Tony Rice, and others), Boone Creek (again with Ricky Skaggs) and Alison Krauss and Union Station. Finally, there's the fact that as sideman and band member, Douglas has over 1,000 album credits with artists ranging from David Grisman to Paul Simon, Trisha Yearwood to Del McCoury.

Important to both his identity and to those he lends his talents to is the fact that "Flux," as they call him, still listens and learns. His ear for the subtle detail of different styles has not only contributed to Jerry's unique sound and repertoire, but has also allowed him the flexibility to customize his performances for the artists he's working with. "I'm like a chameleon . . . I'm able to slip in and out of character." Jerry said in a recent Bluegrass Magazine interview. "That's what I've learned from doing so many sessions; it's not being dishonest, it's who I am, it's really me." Fortunately, this excitement about presenting the different musical facets also benefits the many types of crowds, from bluegrass to jazz, that Jerry encounters on the road. "I have great respect for any kind of music and I tailor what I play for the audience."

This ethic has certainly paid off for Flux. Not only has he become arguably the most recognizable dobro player around, sideman or not, but he's also reaped the rewards of both culminating personal style and complimenting others' efforts. To date Douglas has won six Grammy Awards, six International Bluegrass Music Association Dobro Player of the Year awards, and seven Academy of Country Music Awards for Best Instrumentalist. His sessions alongside top country artists grace the airwaves countless times a day. Beyond the format, his virtuosity has attracted a following that includes musical peers as well as fans from all walks of life.

Douglas sets new limits with the Restlesso on the Farm album, though he never loses touch with the organic nature of the dobro. Whether cracking through standup bluegrass, blues, eastern themes, country standards or elements of jazz, Restless on the Farm reflects true diversity and mastery of the instrument.