Posted in MusicWorld on June 12, 2001 by Rob Patterson 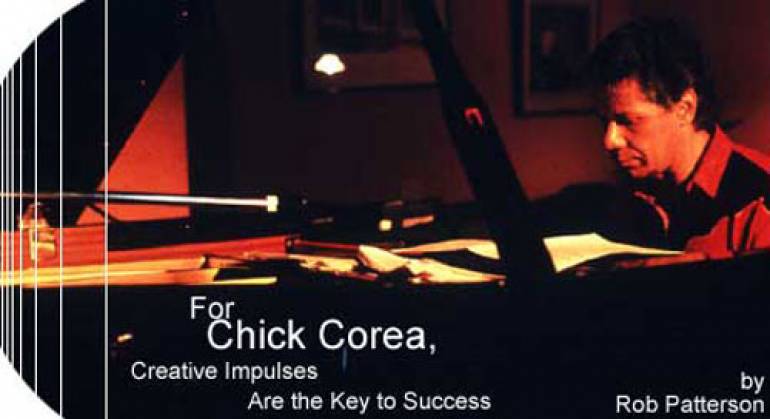 In the annals of 20th century music and surely the 21st century as well, pianist and composer Chick Corea looms large for both his innovations and his fealty to honorable traditions. His seminal work with Miles Davis in the mid-1960s on Bitches Brew and In A Silent Way as well as Corea's later leadership of Return To Forever indelibly influenced the nature of jazz (and rock & roll as well) by founding and furthering the style known as fusion.

Yet as much as Corea has been a major force for musical progression, he has also built that impetus on a deep musical foundation, and paid tribute to his forebears and influences on such recent albums as Remembering Bud Powell, with guests like Roy Haynes, Kenny Garrett, Joshua Redman, Wallace Roney and Christian McBride, and The Mozart Sessions, recorded with the St. Paul Chamber Orchestra with Bobby McFerrin conducting.

It's all part of Corea's underlying philosophy about music. "Styles of music can be total red herrings when it comes to understanding what elements make up any music one comes across," he explains. "A musical culture is always formed by ideas and creations that originate from individual artists and then are nurtured, developed, enhanced, edited, added to, turned upside down and generally altered to fit a particular artist's needs and desires."

And in that spirit, Corea has continued to create music in any number of formats with a variety of approaches. Recent years have found him returning to the acoustic piano after decades as an electric keyboard icon, first with the group Origin, which Corea refers to as his "small orchestra," and lately in his New Trio with the Origin rhythm section of bassist Avishai Cohen and drummer Jeff Ballard, dubbed "my intimate ensemble" by its leader. Since 1992, Corea has also run his own label, Stretch, with longtime manager Ron Moss, releasing not only his own CDs but also albums by Roney, Cohen, Robben Ford, Eddie Gomez, Jason Lidner and others.

Corea's latest release for the label, Past, Present & Futures, reflects his breadth of vision with a Fats Waller song, explorations of the music of Spain, Morocco, Egypt, the Middle East and Latin America that have long influenced Corea's compositions, and a Corea original, "Fingerprints," that tips its hat to the song "Footprints" written by Corea's peer and former Miles Davis bandmate Wayne Shorter.

It's been more than 40 years since Corea dropped out of Columbia University after spending every night for two weeks at Birdland soaking up musical inspiration that still feed his muse. And the lesson he has learned over that time, as Corea told a Berklee College of Music graduating class he addressed in 1997, is that following one's creative impulses is the source of genuine success. "It's all right to be yourself," he urges other musicians, "In fact, the more yourself you are, the more money you make."