Posted in MusicWorld on December 16, 2002 by Jon Matsumoto 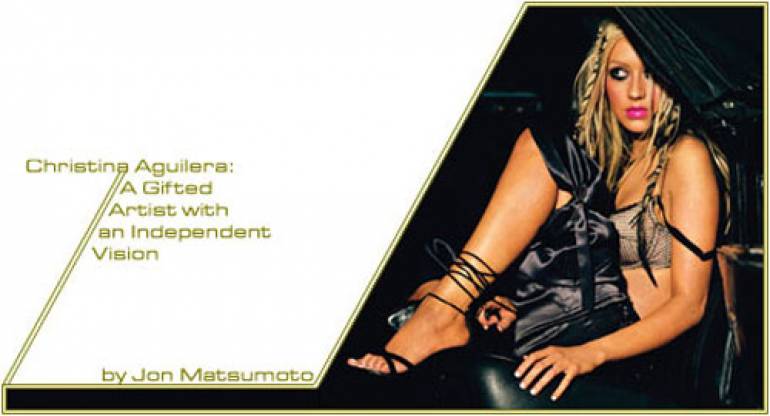 In 1999, 18-year-old Christina Aguilera emerged as the latest teen star to appeal to young listeners with a catchy, radio friendly brand of pop. She was blonde, demurely flirtatious and sexy in a PG sort of way.

Aguilera’s first single, “Genie in a Bottle,” rocketed to the top of the pop charts, and her subsequent, self-titled debut album went on to sell more than eight million copies. In 2000, she released a Spanish-language disc called Mi Reflejo.

But despite her enormous commercial success, questions lingered concerning Aguilera’s lasting power. Once a member of “The New Mickey Mouse Club” along with future teen sensations Britney Spears and members of *NSYNC, she was very much a young artist who had been groomed and tailored for pop success by savvy record company executives.

After Disney recruited her in 1998 to sing the song “Reflections” for the animated film Mulan, Aguilera was signed to RCA Records. The label spent a rumored $1 million for a team of songwriters, producers, voice teachers and marketing experts to help turn the powerfully voiced lass into a household name.

With Stripped, her recently released second English-language album, Aguilera was bound and determined to shed her teen idol image and to prove that she is a gifted artist with her own independent vision. Mission accomplished.

The title of the album holds multiple meanings. It is Christina stripped of all the hype, the rumors surrounding her personal life, and sometimes her clothes. With Stripped, Aguilera unveils a far more adult image that is often steamy and erotic. For a recent Rolling Stone cover photo, the Pennsylvania native literally did strip naked, though she didn’t bare all thanks in part to a strategically placed guitar. Similarly, the front cover of Stripped finds her topless with her hair extensions covering her breasts. The album’s first single, “Dirrty,” is exactly that — a sensual and hot-blooded dance number that also features rapper Redman. She also describes her new song, “Get Mine, Get Yours,” as a song about “casual sex.”

But a number of critics have also noted that most of the 20 tracks on Stripped reflect a talented vocalist with something positive and meaningful to say. The song “Can’t Hold Us Down” is practically a feminist anthem designed to empower women and girls. The track “I’m OK” therapeutically addresses her difficult early childhood.

Then there is that voice. Aguilera’s vocal chops were never in question, but with Stripped she sings with additional nuance and maturity with tracks like the soulful “Loving Me 4 Me” and the flamenco accented “Infatuation.”

Clearly, this former teen dream is all grown up and built to last for years to come.